The Commandments of God and the Faith of Jesus

The Third Angel’s Message of Revelation 14 sounds a warning to the world against receiving the Mark of the Beast and describes the mission and character of God’s people in the last days, saying: “Here is the patience of the saints: here are they that keep the commandments of God, and the faith of Jesus.” Rev. 14:12.  Emphasis has been given, quite rightly, on the keeping of the commandments of God as a safeguard against being deceived into receiving the Mark of the Beast.  But what of the “faith of Jesus”?  This is the aspect of that final warning to the world that links the message of the third angel to the message of righteousness by faith in Jesus. 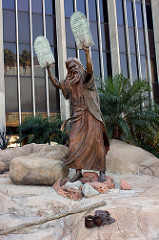 Photo by Prayitno / Thank you for (11 millions +) views

The Commandments of God

There is no question as to what are the “commandments of God”.  There is only one set of commandments that God himself gave, the Ten Commandments.  He spoke them audibly from Mount Sinai in the hearing of a multitude.  He wrote them with His own fingers on two tables of stone.  Some people try to get away from keeping the Ten Commandments because they find the fourth commandment, which requires us to keep the seventh day Sabbath, inconvenient.  The fourth commandment says: “Remember the sabbath day, to keep it holy”, and it indicates clearly that “the seventh day is the sabbath of the Lord thy God” (Ex.20:8-11).

Some will claim that in the New Testament dispensation it is the commandments of Jesus that matter and that Jesus did not specifically say that we should keep the seventh day Sabbath.  This is clearly spurious as Jesus kept the Sabbath (Luke 4:16) and even anticipated that His followers should be keeping the Sabbath long after His resurrection and ascension, by warning them:  “pray ye that your flight be not in the winter, neither on the sabbath day” (Matt. 24:20), in prophesying of the destruction of Jerusalem, which would take place in the year 70 AD.  Others say that the doing away of the glorious ministration of ancient Israel that was centred on the two tables of stone means that the commandments themselves are done away with.  This is also false as the new covenant involves writing the commandments of God in our hearts whereas the old covenant had them written on tables of stone (Heb. 8:7-10).

The world has come to a place where any form of worship is considered legitimate, once it is called worship.  But Jesus specifically indicated that it is the “true worshippers” who “worship the Father in spirit and in truth” that the Father seeks to worship Him (John 4:23).  Even in Christian worship today, it is as if the Father does not exist.  It is as if Jesus is the only one to be worshipped, as though Jesus is not the mediator to create a bridge to the Father.  Make no mistake, Jesus is the Son of God and is to be worshipped.  The Father commands us and angels to worship Him (John 5:22, 23; Heb. 1:6).  But the Father is Jesus’ God who anointed Him, as the Father said of Jesus: “Thou hast loved righteousness, and hated iniquity; therefore God, even thy God, hath anointed thee” (Heb. 1:9).  The example set in heaven, as described throughout the Book of Revelation, is that the angels worship the Father who sits on the throne and Jesus Christ the Lamb: “Blessing, and honour, and glory, and power, be unto him that sitteth upon the throne, and unto the Lamb for ever and ever.” (Rev. 5:13).

The Third Angel warns: “If any man worship the beast and his image, and receive his mark in his forehead, or in his hand, The same shall drink of the wine of the wrath of God, which is poured out without mixture into the cup of his indignation; and he shall be tormented with fire and brimstone in the presence of the holy angels, and in the presence of the Lamb” (Rev. 14:9, 10).  The commandments of men are not very different from the commandments of God as it relates to not killing, stealing or doing other such vices.  The one distinct sign, however, that distinguishes the commandments of God from the commandments of men is the keeping of the seventh day Sabbath.  This is God’s sign and will identify those who are worshipping God, the Creator, as opposed to those who are worshipping someone else.  God says: “And hallow my sabbaths; and they shall be a sign between me and you, that ye may know that I am the Lord your God.” (Eze. 20:20).

Many people are worshipping ignorantly, but the mission of God’s people in the last days is to call them to the worship of the true and living God who created heaven and earth.  It was as a reminder that God created the world in six days and rested on the seventh day, as stated in the fourth commandment, that the seventh day Sabbath was given by God (Ex. 20:8-11).

And just in case someone should think that one reference is not enough to establish the keeping of God’s commandments as a mark of God’s people in the last days, the same thought as given in the Third Angel’s Message is given in the description of the remnant in the following words: “And the dragon was wroth with the woman, and went to make war with the remnant of her seed, which keep the commandments of God, and have the testimony of Jesus Christ.” (Rev. 12:17).  Jesus said that, “in the mouth of two or three witnesses every word may be established.” (Matt. 18:16).

Jesus came to earth to reveal the truth about His Father – that God is love.   He said: “To this end was I born, and for this cause came I into the world, that I should bear witness unto the truth.” John 18:37.  He sealed His testimony with His blood.  He died not knowing what was beyond the grave.  That is the faith that we are called upon to have.  And Jesus is the greatest exemplar of that faith.  Of the saints it is said that, they will be severely tested, tried and persecuted by Satan but “they overcame him by the blood of the Lamb, and by the word of their testimony; and they loved not their lives unto the death.” Rev. 12:11.

Our faith, today, is best reflected in our hope of the second coming of Christ.  The blessed hope of the soon return of our Saviour, Jesus Christ, sums up our faith that, in keeping the commandments of God, even to the point of death, we will not be disappointed.  The promise is that, if we are faithful, we will either be resurrected to eternal life or we will be changed in a moment, in the twinkling of an eye and be caught up to meet the Lord in the air (1 Thess. 4:14-17; 1 Cor. 15:51, 52), when Jesus Christ returns.  Jesus trusted His Father to raise Him from the dead.  We must trust that Jesus will do the same for us.  God’s counsel to us is confirmed by two immutable things: His promise and His oath, as we are told: